"There is one factor, however, without which my success and that of Aeroquip would have been difficult, if not impossible to attain.  It is difficult to define, yet generally understood, at least here is these United States.  Call it the pioneering spirit, or free enterprise system if you like.  It motivates those in our society who are prepared to give up the quest for security, and pursue a course of action requiring initiative, vision, and boldness.  All the contacts that guided Aeroquip had this spirit." 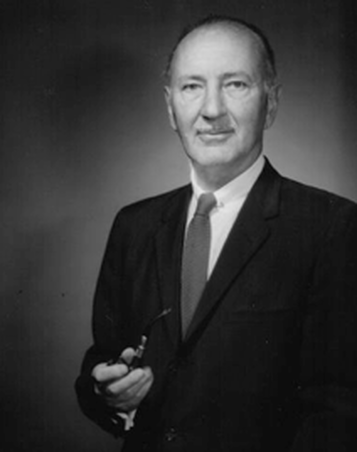 Peter F. Hurst
Aeroquip was founded by Peter F. Hurst, who emigrated from Germany to the United States in 1939.  Trained as an engineer, Hurst had begun his postgraduate career with the Berlin-based Argus Motor Company's British aircraft operations in 1934.  Before long the 24-year-old Hurst was placed in charge of Rotadisk, a subsidiary that designed and made aircraft brakes.  Under contract with German aircraft manufacturer Focke-Wulf, Hurst and Rotadisk undertook a thorough overhaul of the airplanes' wheels and hydraulic brakes.  The braking system's hoses came under particular scrutiny.  Up to this point, hoses were permanently attached to the systems they served.  When they wore out, the entire brake mechanism had to be replaced.  Hurst's team came up with a detachable, reusable hose fitting that allowed the less durable hoses to be replaced without having to go through the tedious and time-consuming process of draining the entire system.  This relatively simple device reduced the weight of the hydraulic brakes, simplified repair, and helped increase the aircraft's fuel efficiency.  It also became the foundation of Hurst's lifelong work.

The inexorable build-up to World War II brought profound changes to Hurst's life and career.  In 1939, Argus sent the young engineer to America in the hopes of setting up a U.S. subsidiary.  Hurst had barely spent a week in the United States when Germany invaded Poland.  Loath to return to his homeland, Hurst got an extension of his original three-month visa and stayed stateside.  Hurst licensed the patents for the hydraulic devices from Argus and began negotiating a licensing and manufacturing agreement of his own with Hayes Industries Inc. of Jackson, Michigan.  When that plan fell through, he decided instead to form his own manufacturing concern.  Hurst enlisted the financial and managerial backing of some of Jackson's most prominent businessmen, among them: Charles Hollerith, Don T. McKone, Sr., Stuart M. Schram, Donald M. Teer, and F.F. Ingram.  Hurst convinced these five and five others to invest $1,000 each in the new venture.  They called their company's stakeholders chipped in another $10,000 each to purchase an abandoned milk processing plant and manufacturing equipment.  Within two years, the company's employee roster had burgeoned to 100.

Aeroquip went public with the sale of over 150,000 shares at $4 each in July 1950.  The proceeds went primarily to the original stockholders, but the company itself cleared about $65,000 to find the ambitious acquisition plan that helped develop Aeroquip's new commercial interests.  Aeroquip's multi-decade string of acquisitions helped it break the $100 million sales threshold in 1966.  By 1968, the company had 4,480 employees, sales of $123.4 million, over $4.4 million profits, and a presence in six countries.  But President Hurst foresaw an even bigger future for Aeroquip and began to seek affiliation with a larger company that could provide his firm with sufficient financial backing to continue its global expansion.  When negotiations with the first candidate, Westinghouse, failed, Hurst successfully merged Aeroquip with the Libbey-Owens-Ford Glass Company (LOF) in 1968 through an exchange of the two companies' shares.  The new parent provided Aeroquip with the funding it needed to continue to increase manufacturing capacity, penetrate new markets, and create new products. 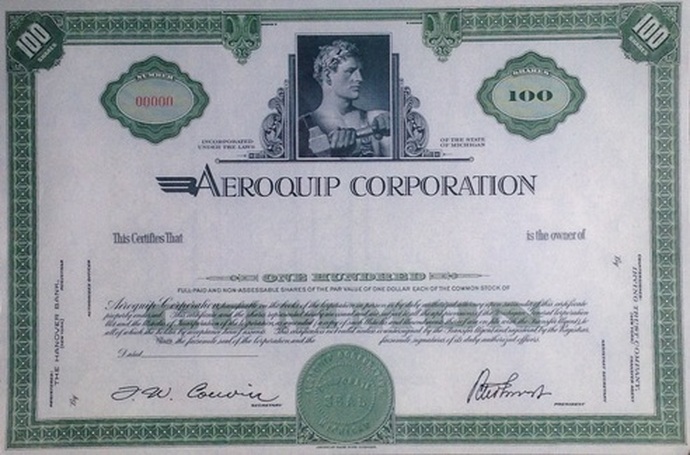 The stock certificate representing ownership in a company, rarely used in stock trading today, was commonplace with investors.  The Aeroquip stock certificate, signed by Peter F. Hurst, President and Fred W. Corwin, Secretary was retired in 1968 upon the merger with Libbey-Owens-Ford Glass Company.

Peter F. Hurst set down the incredible story of his life in a manuscript which he titled "I Came To Stay".  After his death in 1969, his two sons Ronald and Anthony engaged a printer to produce 200 bound copies in his memory.

Today, "I Came To Stay" is available for purchase on Amazon. Your reading of Peter's story will introduce you to a man who had extraordinary abilities but was humbly aware of his limitations and the need for the skills and experience of others.  Unlike some entrepreneurs, he was able to grow in his executive abilities as the company grew, realizing it could not survive and thrive without a strong management team in place.
"I Came To Stay" by Peter F. Hurst 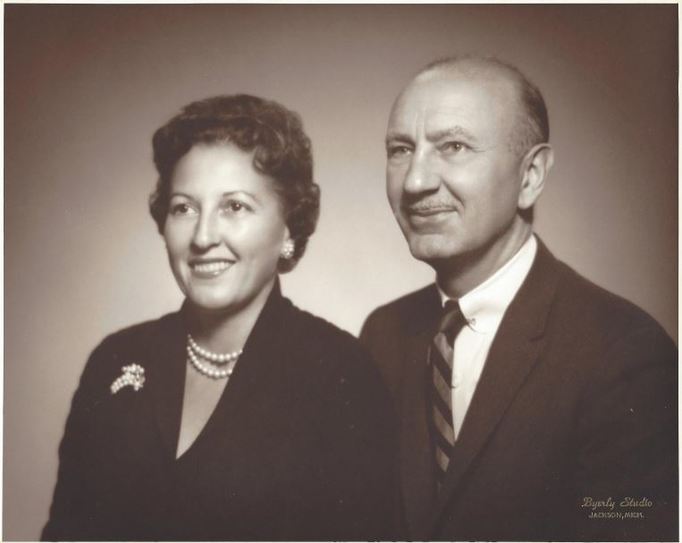